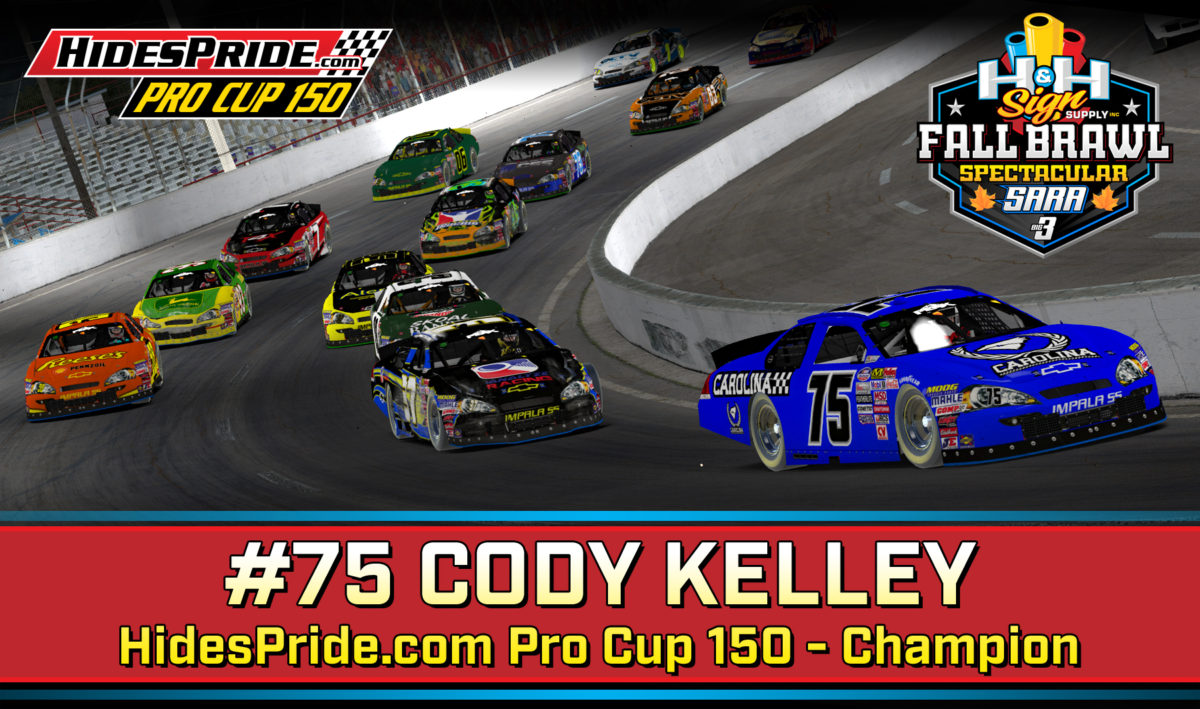 Last Monday night, the 2016 H&H Sign Supply SARA Fall Brawl Spectacular got underway when the K&N/National Pro Cup division hit the track at the Five Flags Speedway. The HidesPride.com Pro Cup 150 would kick off the week-long event, and would mark the first time the K&N car would see competition in SARA since April of 2014. The night got underway with Time Trials, locking in the top 20 cars, and the remainder of the field battled it out in the Last Chance Qualifier just to make the 150-lap feature event.

A total of 31 cars attempted to make the 28-car field, and in Time Trials the top 20 locked themselves in with Tom Wetmore scoring the pole over Cody Kelley. 11 cars would be sent to the LCQ where Ian Layne would take the victory, and transferred to the main event in addition to Dylan Little, Kyle Morse, Eric Spencer, and Jason Stewart. Three provisionals would round out the field, but out front an 8-car invert dropped Wetmore back while Joe Schaffer and Garret Strachota were inverted to the front.

Joe Schaffer led the field to the green but an early caution on lap one slowed the pace early and collected a number of cars including Ty Spearman who would see a very early exit from the race. When the action picked back up, Schaffer continued to lead but it was Cody Kelley who was on the move and took over the lead on lap 20 just prior to another caution just a few laps later.

Not too long after, Kelley led the field back to a lap 45 restart and quickly jumped back out in front leaving the rest of the field to battle it out behind him. Tim Bills moved up into the runner-up spot early on in the run, dropping Schaffer back to fight in the top five with Trevor Edwards and Derek Robinson, but as they battled, some contact would send Schaffer around, collecting Robinson and others, while Edwards dropped to the back as well.

It was after the lap 66 restart when the race had it’s longest green flag run of the night. During the run things remained much the same out front, as Kelley led Bills, with Strachota, Ian Layne and Bill Martin in the top five. While the top five pulled away, a huge battle took place for spots in the back half of the top ten all the way up until the next yellow flag. When the caution flag came out on lap 120, it meant it was finally time for pit stops and tires as all of the lead cars came down for fresh rubber.

After pit stops, a couple quick cautions led to a lap 134 restart with just 16 laps to go, and two separate races broke out. Cody Kelley continued to lead the battle up front for the overall victory, while many others elected to play it safe to secure a clean race, with a portion of the prize payouts going to cars with less than 3 incidents meaning a number of drivers chose to ride it out to give themselves a chance at the payout.

Up front though, the closing laps were easy for Kelley as he pulled out over a full second into the lead and coasted around to take the checkered flag, securing yet another victory in a Big 3 event. Tim Bills survived a late incident while fighting through lapped traffic but remained in the 2nd spot to stay on the podium. Trevor Edwards recovered from his incident earlier in the race to charge back up to a 3rd place finish. Ian Layne finished 4th while Dylan Little had his best run in SARA Fall Brawl competition with a top five finsih.

After the race, a total of 10 drivers would share a portion of the $250 purse provided by HidesPride.com. Cody Kelley would walk away as the big winner scoring a total of $71.40, Tim Bills would take home $35.70, and the eight other drivers winning a total of $17.85 included Trevor Edwards, Ian Layne, Chris Wetz, Wes Graham, Matt Eddy, Clay Snider, Mason Dunn, and Garret Strachota.