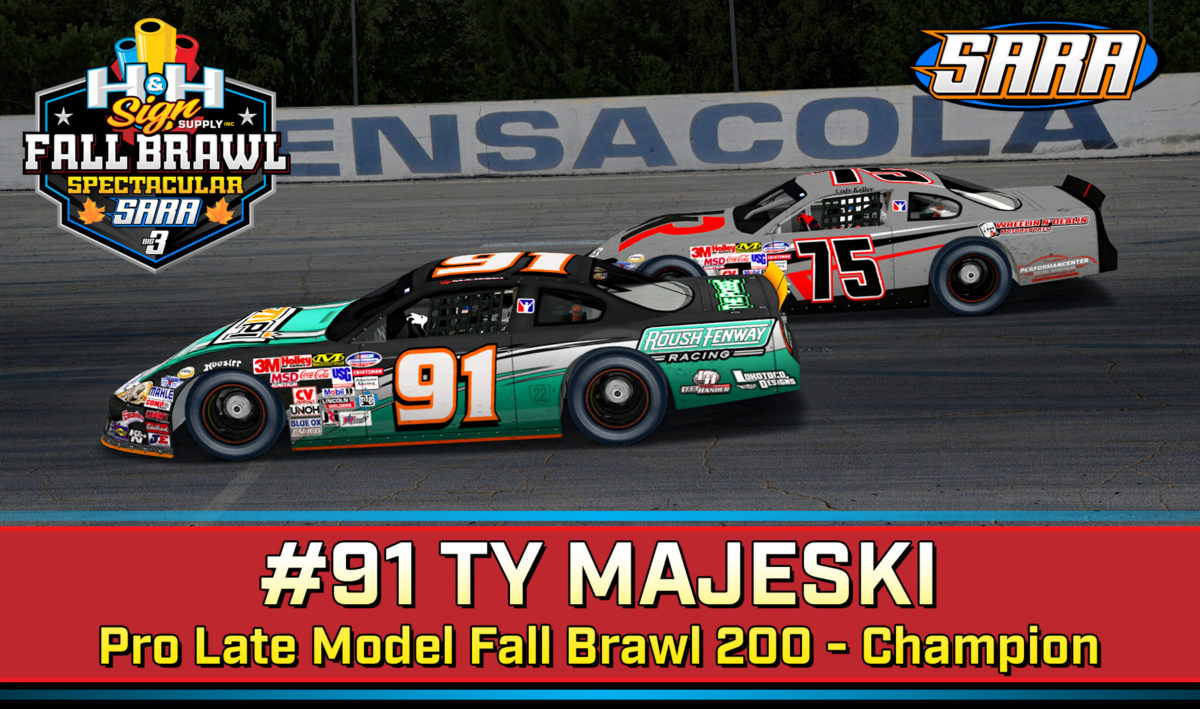 Article written in part by the Digital Forge Broadcasting Network.

Last Tuesday night, the H&H Sign Supply Fall Brawl Spectacular continued when the Pro Late Model division took the track for their race night. Last year’s late model feature in the Fall Brawl resulted in arguably the leagues most dramatic finish, but this year’s Fall Brawl would prove to be just as spectacular as two of the league’s best would brawl it out in the closing laps for victory.

Early in the night, a total of 31 drivers attempted to qualify for the 200-lap feature, and in Time Trials drivers set their best times with the top 20 locking themselves into the feature. Ty Majeski would set the fast time qualifying at 16.336 seconds to grab the pole. As for the remainder of the field, they would have to battle for 25 laps in the Last Chance Qualifier, and would see a 12 degree drop in track temperature before the green flag waved in the feature.

Wes Graham started up front in the LCQ as his qualifying time of 16.721 seconds put him just outside the Top 20. As they battled for 25 laps to make the feature, it would be a brawl among eager drivers such as Ben Nile, Hunter Combs, and Darrell Hamlin. Graham would lead a total of 13 laps, but the other 12 Laps would go to Ben Nile as he would hard charge his way through the field to lead after starting 7th on the grid. Hamlin would find a 2nd place finish after starting 10th on the grid. Paul Boswell would finish 3rd, Scott Dunlap 4th, and Hunter Combs would round out the top five, locking in their positions for the feature which would place them starting 21st and back. Drivers that were able to get in to the feature via provisional were: Justin Sullivan, Eric Block, and Wes Graham.

As the night progressed the temperatures cooled the track to 72 degrees. The temperature would be the only cooling factor on the night as the tension heading in to the feature was heightened by the close competition taking place in the LCQ. While Majeski set the fast time, there would be a seven car invert, putting the fast qualifier back in 7th on the grid. Posse teammate Bill Martin would be inverted to the front and led the field to the opening green flag. He would lead the first 4 laps before Wheelin N Dealin Motorsports’ David Krikorian would take the lead on lap 5 and go on to lead 56 Laps. Krikorian’s time up front would see four of the total eight cautions in the race. After battling side by side for the lead, Trevor Edwards would pass Krikorian off of turn four to take the lead. Krikorian would fall back outside the top five as he would be held up on the outside groove.

Edwards would lead a total of 18 Laps until Lap 79 when Majeski would make the calculated pass on the inside of turns three and four, which forced Edwards to the outside groove, leaving the door open for Cody Kelley to move up into the 2nd spot. The green flag run would extend through the halfway point of the race and when the caution flew on lap 110, it opened up the pit strategy at the front of the field. Majeski and Kelley stayed out on old tires, electing to wait to go down pit road. Four other cars would join them, leaving Tom Wetmore as the first car off of pit road with new tires restarting in the 7th spot.

It didn’t take long for the cars with fresh rubber to work their way to the front of the field as Wetmore would lead a group of cars to the front. Majeski would go on to lead until lap 132 before Wetmore would take the lead, ending Majeski’s 53-lap lead. Wetmore, Krikorian, and Edwards took over the top three as Majeski and Cody Kelley fell back to 4th and 5th respectively waiting on a caution to wave so they could make their final pit stop picking up fresh tires. Their break would come on Lap 156 when Joshua Hart would have a minor spin, bringing out the 7th caution flag of the night.

This would send the remainder of the field including Majeski and Kelley down pit road, and it only took them a few laps to get back to the front. Kelley would surge past Wetmore to take the lead on lap 166 with Majeski following him through into 2nd, just prior to the final caution on lap 170.

“I knew it was worth the risk, and I figured there was going to be a caution, just because after a long green flag run, like I said before, the track is really abrasive and guys start getting free and so I figured there would be a caution and it ended up working out.”Ty Majeski

A restart with just 25 laps left would set up a battle for the ages. Kelley got the jump out into the lead while Majeski was able to get down in line in 2nd and would set out to chase down the lead. After a few laps, the small gap that Kelley had built began to shrink as Majeski closed in and looked to set up the pass. With just 10 laps to go, Majeski was able to open up the bottom groove and would battle side-by-side with Kelley for the lead.

The two ran door-to-door for the lead as the laps wound down, with neither car able to gain the advantage. Kelley held the lead on the outside groove by less than a tenth of a second for a couple laps, before Majeski nosed ahead on lap 192. After a couple more laps of dueling it out side-by-side, Majeski finally moved up clear into the lead on lap 194 when Kelley got tight out of turn two and clipped the outside wall.

There was no looking back as Majeski would open up the gap to a 4/10th second lead when he crossed the start/finish line taking the checkered flag, scoring the victory in the Pro Late Model Fall Brawl 200. Despite leading late, Kelley would have to settle for a 2nd place finish and one driver taking advantage of the late race pit action, Hunter Combs, emerged from a 25th position start to rally his car to 3rd place finish. Ty Spearman, one of the drivers able to run the outside groove and remain competitive, finished 4th. Another driver from the LCQ, Darrell Hamlin, would finish in the Top five. There would be a total of 8 Cautions, 6 Lead changes with an Average Lap time of 16.730 seconds taking place in the 200 Lap Pro Late Model race.