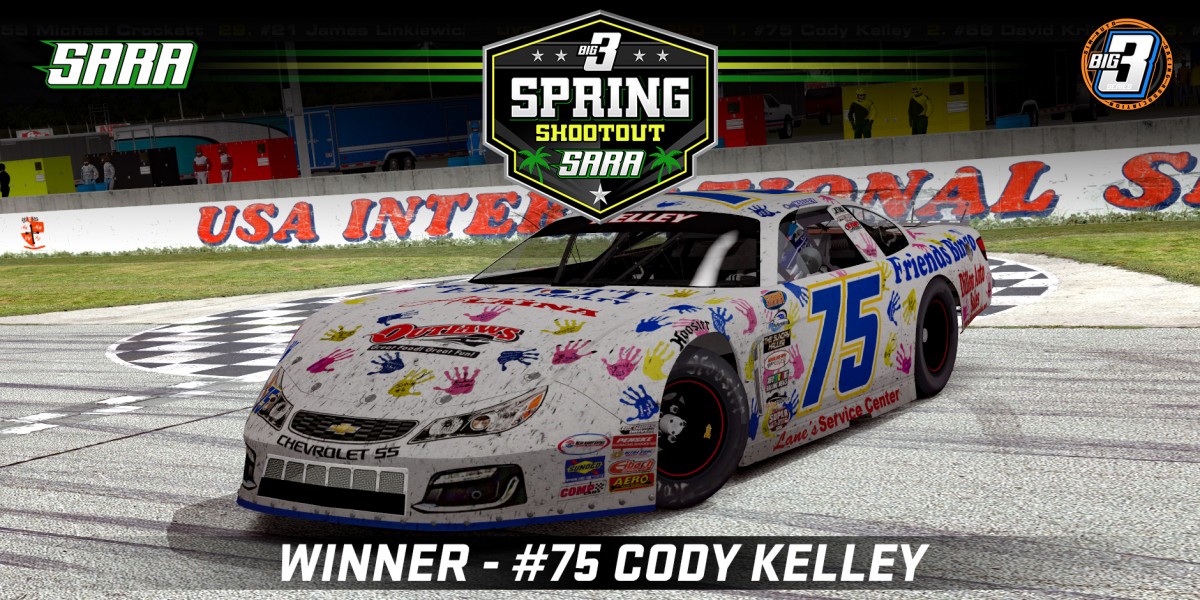 The RB Performance Super Late Model Series took the past couple weeks off from regular season competition, but the division and many of it’s regulars were hard at work competing in SARA’s first major event of the year, the Spring Shootout.

Fresh off picking up the Qualifying Dash win the night before to earn himself the pole for the 250-lap race, Joe Schaffer brought the 29-car field to the green flag for the event. However a quick caution on lap 1 slowed the pace after an early favorite in Ty Spearman got turned around into the outside wall, ending his chances at a strong run.

After the early restart, Schaffer jumped back into the lead but Cody Kelley was able to close in on the rear bumper of Schaffer, and the two cars would run nose-to-tail out front as they pulled away. With a competition caution expected on lap 100, most of the field took their time making moves and being patient early on which allowed the next green flag run to extend until lap 80. Schaffer continued to lead until lap 28 when Kelley finally decided to make his move, and once he got by for the lead, Kelley began to set sail out front.

The long green flag run allowed the front of the field to shuffle a bit as cars began to fall off late in the run. By lap 20, Camaron Hamilton, David Krikorian, and Tim Bills all ran in the top five. But prior to the lap 80 caution, Hamilton had fallen to the back half of the top ten and Bills also dropped back as guys like Windell Stratton and Derek Holzhausen cracked the top five during the run.

As things cycled out after the stops, Fred Moreau had gained the lead after his early pit strategy, but it only took Kelley three laps to charge back to the top spot after he cycled out to third prior to the restart. Just after Kelley grabbed the top spot, another caution flew, setting the field up for a lap-105 caution which would eventually change the landscape of the race.

Kelley led the field to the lap 110 restart, and as cars battled inside the top five behind him, a couple of cars got together as Stratton and Moreau made contact on the exit of turn two, sending Moreau around in front of the field. With cars inside the top five turned sideways, much of the field was left with no where to go and would pile into the wreck that collected over twenty cars. Many of the heavy hitters in the race would be knocked out early, or left with plenty of damage, hurting their chances at shot for the win.

With much of the field damaged from the “big one”, Kelley was the car to beat over the remainder of the race. With a trio of cautions leading up to lap 200, Kelley was able to jump ahead into the lead each time without much of a battle for other front runners. Krikorian moved up into the runner-up spot and was able to hang with Kelley for a few laps before the leader would begin to stretch the lead during the runs.

One final caution came out on lap 199, erasing the four second gap that Kelley had built out front, and most of the front runners came down pit road one last time to take their final set of tires. One driver that didn’t pit was Joe Schaffer, but his return to the lead was short lived after the restart as Kelley overtook him before the next time they crossed the line. Kelley began to pull away once more, with Krikorian also distancing himself from the rest of the field.

The race ended up going green the rest of the way, which allowed Kelley to set sail out front, building his lead back up to nearly from seconds once again as he came around to take the checkered flag, picking up the Spring Shootout victory. Kelley’s dominating performance saw him lead 110 laps of the race, as he earned an impressive payday with a big check for $59.50. 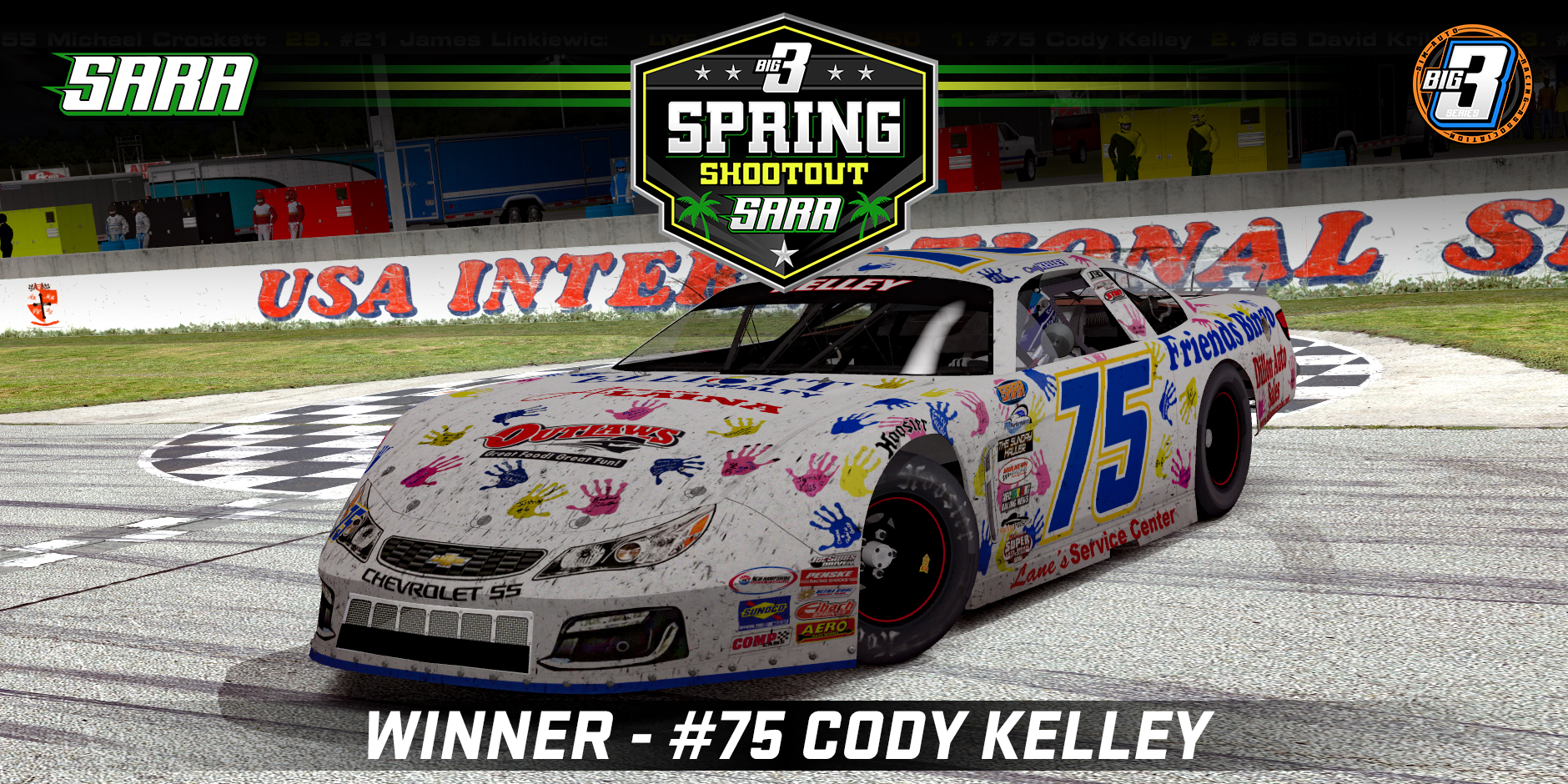 Behind the race winner, David Krikorian picked up a 2nd place finish after he ran inside the top five all race long but didn’t quite have enough for Kelley. Austin Yarbrough and Windell Stratton battled for the 3rd spot for the final 100 laps or so, swapping the spot a few times before Yarbrough ended up gaining the advantage late to finish 3rd, with Stratton ending up in 4th. After a quiet first half of the race, James Wenzel was able to recover from getting minimal damage in the big wreck, and had an impressive 5th place run despite the damage.

Just outside the top five, Russell Berry moved up inside the top ten after the big wreck and brought his car home with a 6th place finish. After leading early and looking like a top five car, Schaffer fell back during the final run after not taking tires and had to settle for a 7th place finish. Mason Dunn made his first career SARA start and ended up with a solid 8th place finish as the last car on the lead lap. Clay Snider and Bill Martin rounded out the top ten after limping their cars home to the finish, one lap down.

The SARA Super Late Model Series returns to action this week as they look to wrap up the final four weeks of the season. The next major event on the schedule will see the Super Late Models and Street Stocks take on Southern National Motorsports Park, from August 1-4, in the Summer Heat.

For a full race replay provided by LSRTV, check out the broadcast below: