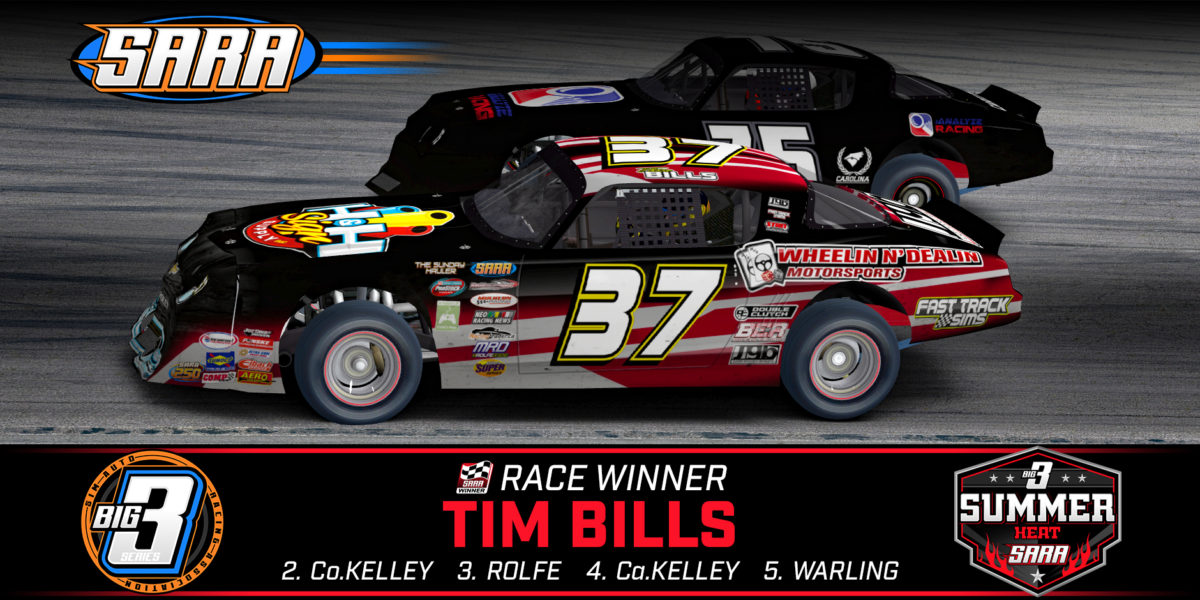 The Summer Heat closed out on Thursday night with a 150-lap feature event after Monday night’s qualifying and heat races.

Back on Monday, it was Tim Bills set the fast lap in Time Trials with a lap of 15.711 seconds. The top ten cars advanced into the Qualifying Dash and the invert brought Ty Spearman to the front of the pack and he would run away out front to pick up the Dash victory. Out of the cars that did not make the Dash, Christopher Alcares ended the night by picking up the solo Heat Race victory to put himself 11th on the grid as a 21-car field would return for a nighttime battle at Southern National on Thursday.

When the green flag dropped on Thursday, it was Ty Spearman who led the field to the green, with Super Late Model Summer Heat winner Cody Kelley on his outside, and Windell Stratton, Evan Sorensen and Tim Bills completed the top five on the starting grid.

Spearman led through the first few laps, as Windell Stratton would take over second place at the drop of the green flag with Kelley and the outside lane backing up. After a quick yellow, Evan Sorensen took over 2nd from Stratton on lap 10, but it would not take Cody Kelley long to rebound from starting on the outside on the initial green, as he moved around Sorensen on lap 14 for 2nd, and then he went in hot pursuit of Spearman for the top spot.

Kelley wasted no time once in the second position to get up to and around Spearman for the race lead, taking that spot on lap 20. Spearman would also surrender 2nd place to Tim Bills, and eventually third to Casey Kelley, as the field would slowly get smaller and smaller in Kelley’s rear view mirror as he powered out to nearly a 2 second lead as the race went through a long green flag run would take place. Tim Bills and Casey Kelley would run 2-3 for this portion of the race, with them building nearly a three second gap over 4th place Stratton.

The race’s first yellow flew on lap 64, so Kelley’s lead would be erased. On the ensuing restart, Kelley didn’t stretch away from the field as Tim Bills and Casey Kelley were able to run in 2nd and 3rd but stay within a half second of the race lead. Once again, the race would go under yet another long green flag run. Kelley’s gap over 2nd and 3rd would never increase to more than sixth tenths of a second as the top three stayed nose to tail working their way around the track and through lap traffic.

The caution didn’t come out again until there was just 20 laps to go as the leaders had managed to lap the field into the top 10. Cautions did breed cautions at the end, as another quick yellow would take Casey Kelley out of the running for the win as he was sent spinning by another car, leaving the race to be a showdown between Tim Bills and Cody Kelley when the race restarted with 5 laps remaining.

Bills would stay right with Cody Kelley on the restart, and slid down behind him in line. Bills got a good run on Kelley on lap 147, and got to his bumper and then proceeded to make some slight contact with the bumper of the 75, and made his move into turn 3 coming to the line with 3 laps to go. Kelley would fight with Bills from the outside line and at the stripe they would be separated by less than half of a tenth with 3 laps and 2 laps to go at the start/finish line. On the white flag lap, Bills finally was able to clear Kelley and came around the final corners to claim the Summer Heat victory by leading just the race’s final 3 laps.

Cody Kelley finished in 2nd after leading 126 laps and dominating the majority of the night. Matt Rolfe found himself bouncing in between the top five and ten most of the race, and moved up late to finish 3rd. Despite being involved in a late incident, Casey Kelley rebounded to a 4th place finish after being in the top 3 for the majority of the night. Travis Warling received a free pass on lap 132, and rounded out the top five. Clay Snider, Christopher Alcares, Tyler Howell, Windell Stratton and Tom Wetmore made up the rest of the top ten.