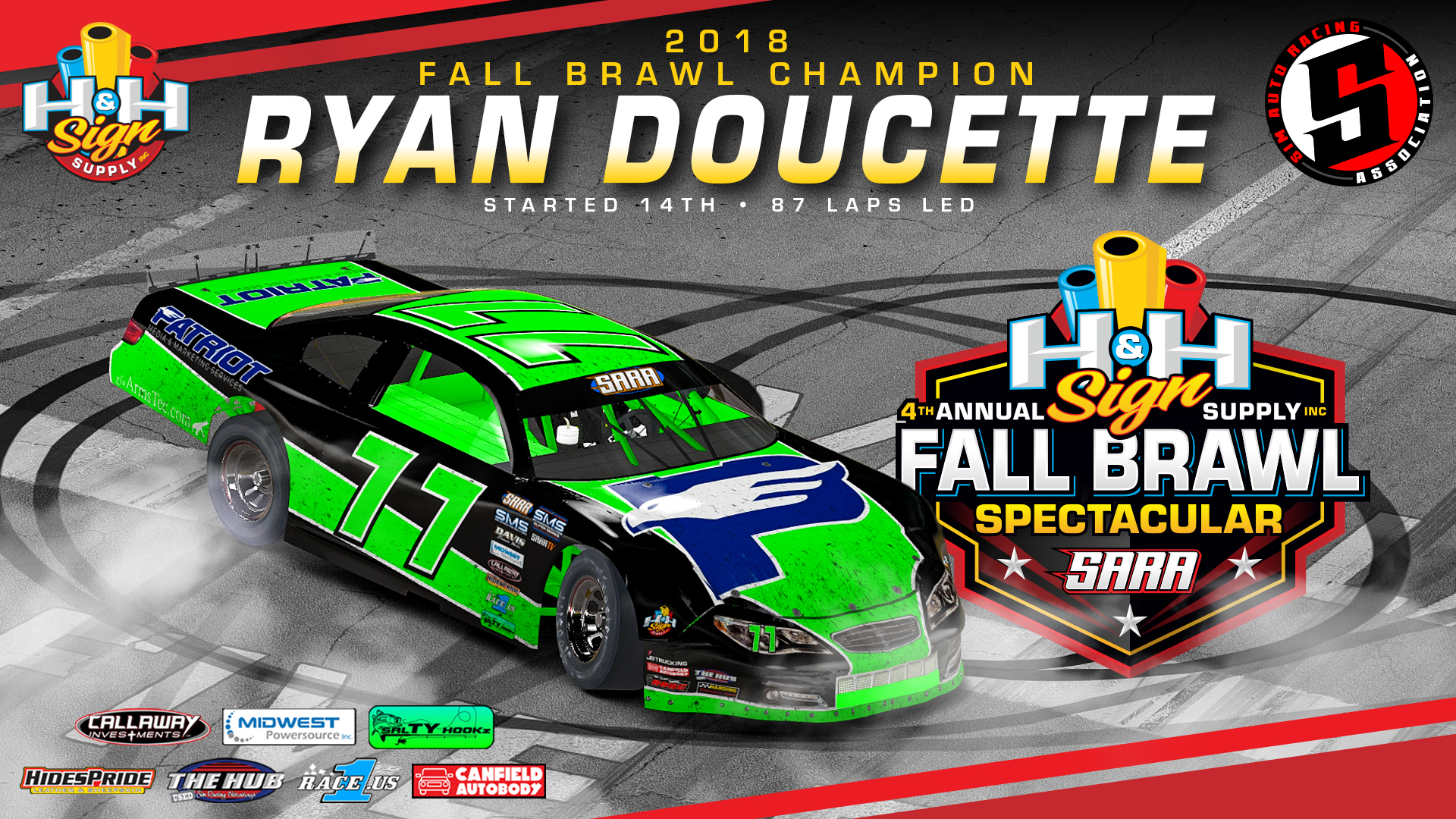 For the 4th straight year, the H&H Sign Supply Fall Brawl Spectacular was headlined by the Super Late Model division as they would set out to do battle for 250 laps at Five Flags. A total of 50 drivers would enter SARA’s biggest event of the year, and after Wednesday night’s Qualifying Night, the field was chopped down to just 30 after a full night of Time Trials, Qualifying Races, and C/B-Mains.

Race Summary – After winning the Dash the night before, Tim Bills would lead the field to the green flag for the 250-lap and $300-to-win main event. Bills led the opening 13 laps but the handling started going away early and Joe Schaffer Jr. was able to get by. His lead was also short lived though as Jimmy Mullis was making a charge and took the lead on lap 21 and began to pull away.

About 20 laps later the first caution of the night flew for the pole sitter Tim Bills, as he would get turned around and collected a couple others. After the restart, Mullis would jump ahead and during the next 100+ lap green flag run he would again pull away from the rest of the field. Behind him, Brad Mahar would eventually move up into 2nd with Colin Allman, Jim Caudill Jr., and Keith Medeiros running strong in the top five.

However as the race closed in on the 150-lap mark, a few cars began peeling off the track under green as low fuel forced cars down onto pit road to the attention of their pit crews. Mahar, Allman, Medeiros, Schaffer and others would all give up their spots on track, but when the caution flew on lap 155, they would all be trapped laps down, and their chances at winning were gone.

The lap 155 caution began the tire strategy for the night, as Jimmy Mullis led a majority of the field down pit road for their one set of fresh rubber. With most of the leaders taking four tires and needing to take enough fuel to make it to the end of the race, some drivers elected to take all four tires but would need to come down pit road once more to top it off with gas, while others elected to take two tires at a time on their stops. Mullis was able to get all four tires on his stop, but after waiting for fuel he would receive a penalty while trying to beat the pace car off of pit road, which would put him deep into the field.

The first car off of pit road however, was Ryan Doucette who had been running just outside the top ten prior to pit stops. Doucette was involved in the lap 44 caution earlier in the race, allowing him to come down pit road to top his car off with fuel. So when he came down to get his tires on lap 155, he didn’t have to wait as long to fuel up, which ultimately gave him the track position he needed to contend for the win.

While most of the field stopped for tires, Ty Majeski stayed out and led the field back to green on lap 162. But the cars with new tires were quickly charging. Doucette restarted 4th and it took him just two laps to take the lead from Majeski and he would look to run away while others were trying to navigate traffic. The next caution flew on lap 178, which allowed everyone else who was waiting on tires, including Majeski, to head down pit road for their tires.

With the laps winding down, cautions began to breed cautions from laps 180-210 due to the field being shaken up from pit strategy. Doucette continued to lead through the cautions, while Mullis had already worked his way back to 2nd, and Majeski was inside the top five as well. With 40 to go, Doucette jumped back out into the lead with Mullis in his tire tracks, but during the next short run the lead began to slightly grow each lap as Doucette pulled away.

One final caution would set up a restart with just 10 laps to go, with Doucette needing to hold off some of the best in the league for the biggest win of his career. Mullis restarted 2nd with Majeski in 3rd, and when Doucette got the jump out in front once again, it left the others battling for spots on the podium. This allowed Doucette to gap Mullis by a few car lengths which was all he needed.

Doucette would build his lead out to nearly a second over the final 10 laps, and held on to become the champion of the 4th Annual H&H Sign Supply Fall Brawl Spectacular with an impressive drive during the second half of the race. Doucette was just as fast as the leaders during the first 150 laps, and was able to use great pit strategy and track position to put himself in position, and took full advantage to win the race and claim the $300-to-win prize!

Up Next – Both the Davis Chassis Works Contender Series and the Sim Marketing Solutions Super Series will return next week with features at The Bullring at LVMS.