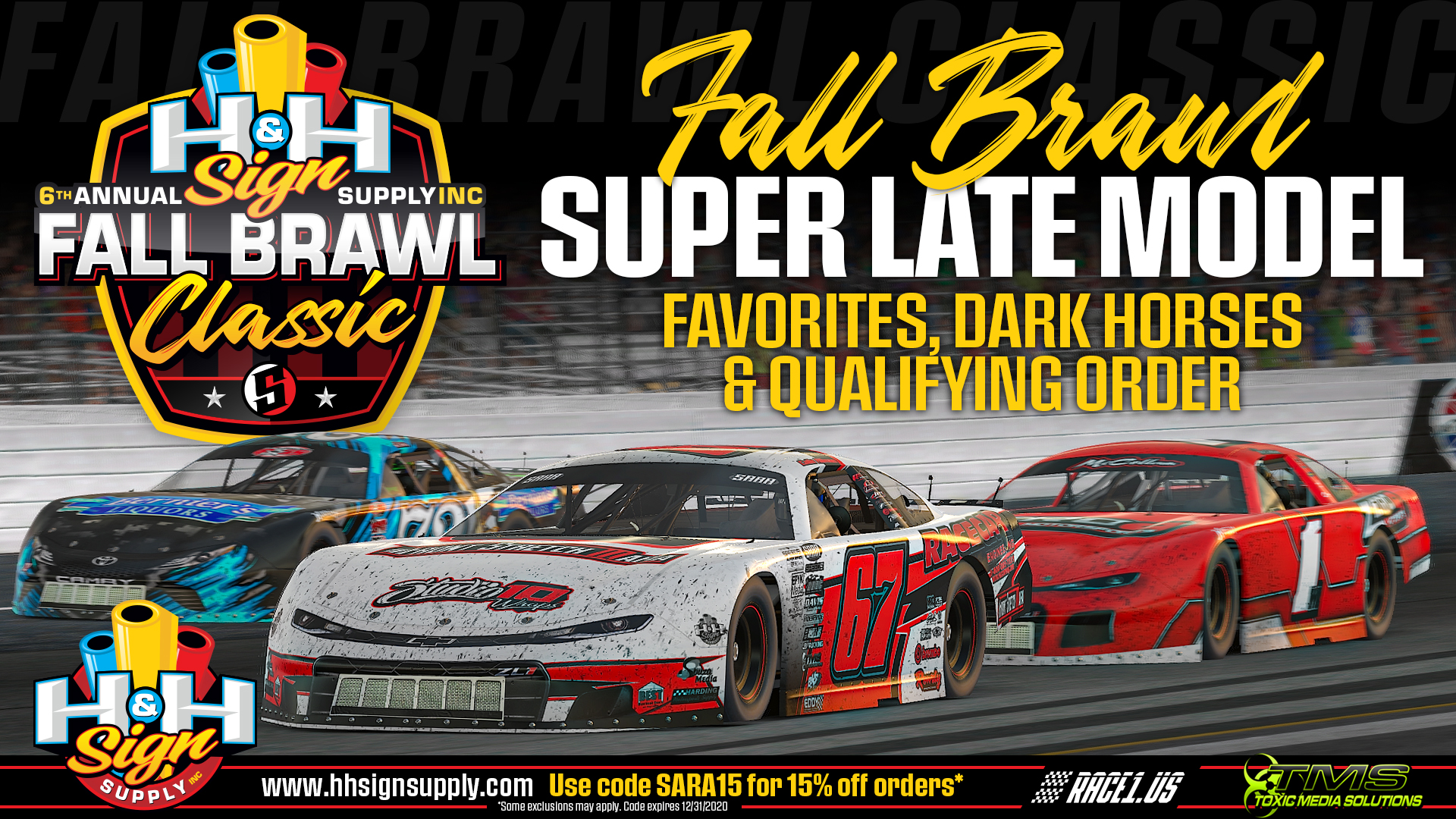 The Super Late Model portion of the 6th Annual H&H Sign Supply Fall Brawl Classic gets underway tonight as over 50 drivers will unload at the North Wilkesboro Speedway for Toxic Media Solutions Pole Night. Before drivers attempt to qualify their way into the 250-lap main event, we have ranked the drivers from the "Favorites" to win it all, down to some "Dark Horses" who would steal the show.

(*These rankings are for fun, unofficial, and for entertainment purposes only. Drivers are listed in ABC order by first name, in each category.*)

The drivers listed below will be expected to be seen at the front of the field, leading laps and contending for the win. These 7 drivers combine for over 175 career victories and 11 championships in SARA competition, and will each be looking to add their names to the list of Fall Brawl Winners.

- Alex McCollum - In SARA's first Super Series race at North Wilkesboro, it was Alex that picked up the victory, and he recently added another Super Series win just two weeks ago. - Best Fall Brawl Finish: 24th

- Cody Kelley - Cody has consistently been at the front of the field in Super Series competition the past few seasons, including a pair of wins in the Spring/Summer Season. - Best Fall Brawl Finish: N/A

- Colin Allman - Colin is the defending Fall Brawl champion and is looking to repeat this year. He has also been strong as of late with two wins and a 2nd at some of the other flat tracks on the Super Series schedule this season. - Best Fall Brawl Finish: 1st

- Devon Morgan - Devon is the two-time defending Super Series champion and is coming off a win just last week at Langley. He was one of the front runners in last year's Fall Brawl and ended up with a podium finish. - Best Fall Brawl Finish: 3rd

- Jimmy Mullis - Jimmy is a former Super Series champion and finished 2nd at North Wilkesboro this past Summer. He has also been in contention for a Fall Brawl win on more than one occasion. - Best Fall Brawl Finish: 2nd

- Ryan Kuhn - Since being moved up into the Super Series halfway through last season, Ryan has a pair of wins and has yet to finish outside of the top ten in 12 starts in the series. - Best Fall Brawl Finish: N/A

- Ryan Matthews - If it wasn't for a blown motor at Oxford this season, Ryan would have 28 straight top ten finishes in the Super Series, which also includes 3 wins during that stretch. - Best Fall Brawl Finish: 7th

The drivers listed below should be expected to have solid runs and will likely run near the top half of the field. Under the right circumstances, it wouldn't be a surprise if any of these guys ended up in victory lane or on the podium.

- Daniel Pope II - Although his recent finishes might not be as high as he'd like, Daniel often qualifies well and runs towards the front of the field in Super Series competition.  - Best Fall Brawl Finish: 12th

- Jacob Harberts - Jacob recently picked up the season-opening win in the Super Series at Myrtle Beach, and is often running inside the top ten each week. - Best Fall Brawl Finish: 9th

- Max Cookson - Max picked up his first Super Series win last season, and can also usually be found running inside the top ten, as long as he stays out of trouble.

- Parker Retzlaff - Parker dominated in the Contender Series last season, which included a win at North Wilkesboro, but has hasn't been able to translate that into Super Series success, yet.

- Parker Traves - Parker has very quietly put together a strong season in the Super Series, with a handful of top five finishes already, and could continue that trend this week.

- Ryan Doucette - Although Ryan's starts in the Super Series have been sparse lately, he is a former Fall Brawl winner that knows how to get it done and will be looking to add a 2nd win. - Best Fall Brawl Finish: 1st

- Thomas Axsom - Thomas has been piling up some wins in our Contender Series has been near the top of the charts in qualifying this season as well, which will be helpful tonight.

- Trevor Edwards - Trevor is another past Fall Brawl champion looking to add a second win to his name, but he's admittedly struggled in qualifying recently which could hinder him in this event. - Best Fall Brawl Finish: 1st

- Treyten Lapcevich - Treyten is another driver that's had recent success in our Contender and Late Model series with a bunch of wins, including a LM win at North Wilkesboro a couple weeks ago.

The drivers listed below should have a good shot at making the race, and as long as they qualify, the could have some decent runs. They may or may not contend for the win, but someone on this list could definitely break thru for a strong finish.

The drivers listed below were voted on as Dark Horses for the event. For some on this list, simply making the race might be a challenge. However if they do transfer into the race, they have the potential to steal the show with a strong run.