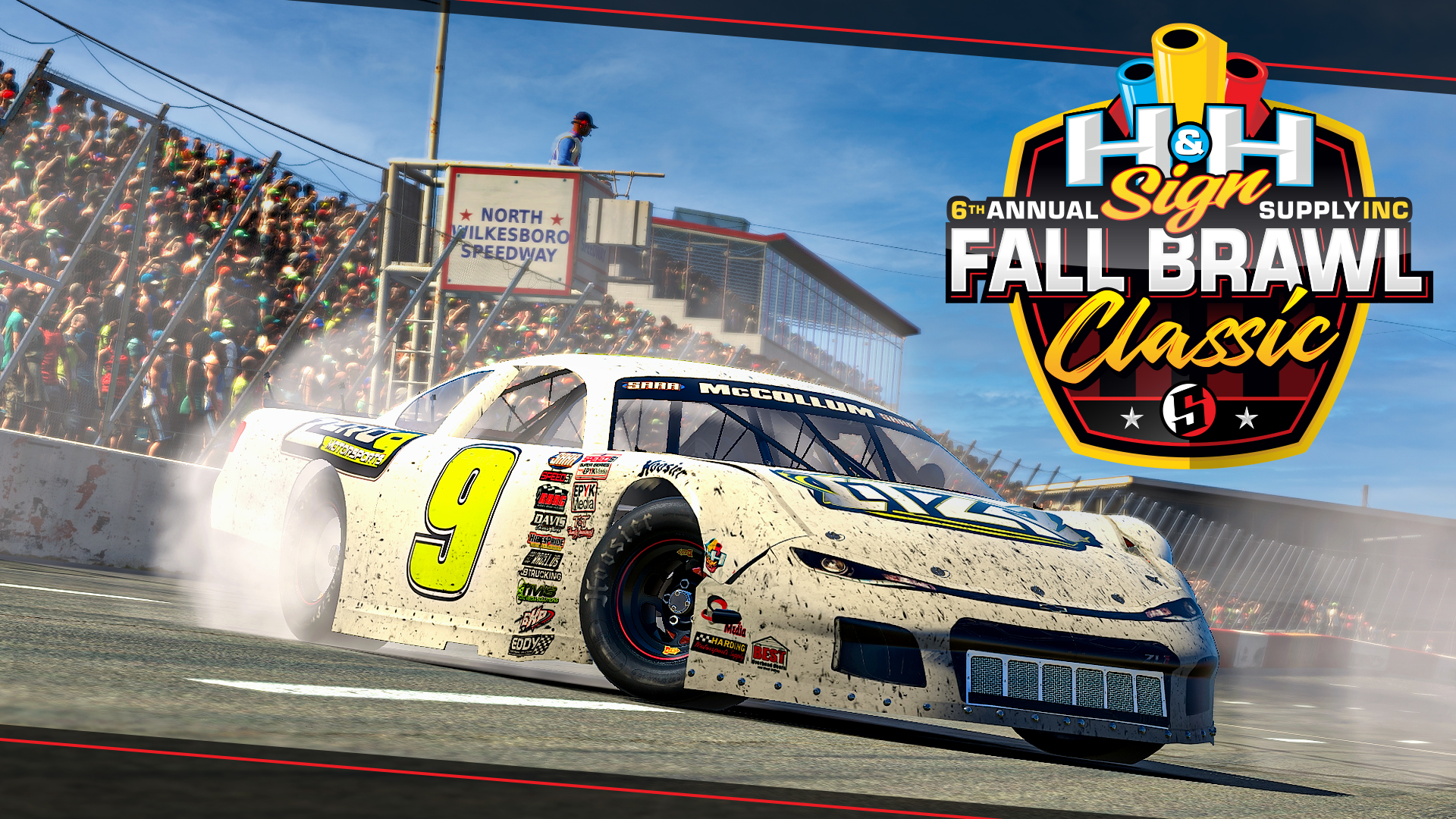 The 6th Annual H&H Sign Supply Fall Brawl Classic moved to a new home of North Wilkesboro Speedway for the 2020 version of the event, after spending the past five years at the Five Flag Speedway.

After two nights of qualifying, the field of over 50 of the best short track drivers on iRacing were cut down to just 31 starters for the Fall Brawl, and Dylan Bates would lead the field to the green flag after winning the Pole Award.

Throughout a handful of early cautions, Bates would continue to show the way out front, and although he was unable to pull away by more than a couple of car lengths, the drivers behind him seemed content to ride in line. Alex McCollum was one of the early movers of the race as he moved up from 12th to the 2nd position, while Daniel Pope settled into 3rd, with Ryan Matthews and Ryan Kuhn rounded out the top five in the first half of the event.

After a long green flag run that went through the halfway mark of the race, a caution would fly on lap 133 which would set up the first pit stop of the night. While usually the tire strategy would be a major factor in the event, the entire field took the trip down pit road for a set of tires, but it would be the fuel strategy that would come into play in the later stages of the race.

Bates won the race off of pit road to maintain his spot up front, while the rest of the top ten would be shuffled around as some drivers would give up track position to take extra fuel. On the restart, Bates jumped ahead and started to pull away from Max Cookson and McCollum who worked his way back up into the top three after a lengthy pit stop.

As the laps continued, it appeared that the field had settled in and the possibility of going green to the finish started to increase. So while the intensity picked up, for some drivers the fuel levels kept dropping and started to become a worry throughout the field.

Prior to lap 200, the lead up front quickly shrunk from nearly 1.5 seconds down to just a few tenths as Bates started backing up to Cookson and McCollum, indicating that he may be one of the drivers trying to save a little fuel late in the race. However each time that gap would close up, Bates would inch back away as the laps wound down.

While fuel concerns were on a number of driver’s minds in the late stages, it became a reality as a handful of front runners would peel off the track down onto pit road for green flag stops. Matthews, Pope, Hugo Paquet and Parker Traves were some of the first drivers forced to pit around lap 220.

With just 20 laps to go, Cookson would give up his spot in the top three. Then just a lap later, heartbreak would hit the race leader as Bates was also short on fuel and had to give up the lead after dominating the first 230 laps of the event.

This handed the lead over to Alex McCollum with just 19 laps to go, and despite all of the chaos around him in the late stages of the race, he would set sail out front. Fuel wouldn’t be an issue for the number 9, and McCollum would cross under the checkered flags to become the 6th Annual H&H Sign Supply Fall Brawl Classic Champion!

After the race, Speed51 spoke to McCollum about his race and his strategy on pit road during the lap 133 caution. “Only reason I won that race was a mistake on my part… I wasn’t paying attention and I filled the whole thing up, a mistake won me the race.”

Bates also caught up with Speed51, after leading 230 laps but coming up just short. “Our whole deal was to maintain track position and maintain the lead. With how the cautions were going early in the race, we figured we would get another caution, and it never came unfortunately. That’s probably the most heart breaking race I’ve ever been a part of.”

Following McCollum to the checkered flag was Parker Retzlaff in 2nd, Ryan Kuhn on the podium in 3rd, and Ryan Doucette and Devon Morgan rounding out the top five.