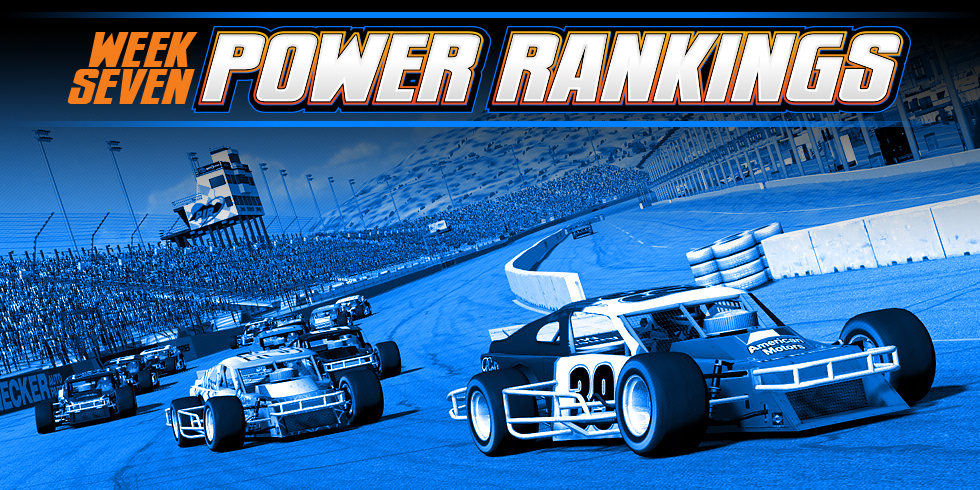 As we finish up the first official off week of the season, let’s take a look back at the Week 7 Power Rankings before moving ahead towards the finish of the season.

10. Ryan Borges – Last Week: 5th (-5)
Ryan had a good string of top ten finishes going prior to Week 7, and he started the week off the same way with a 7th in the SK Modified race. But in the Pro Late Model road course race he ended up finishing 20th, and again finished outside the top ten in the Super Late Model race. Look for Ryan to rebound with more strong top ten runs over the remainder of the season.

9. Clay Snider – Last Week: NR (+2)
Clay has been running pretty well as of late, picking up six top ten finishes in nine starts over the past few weeks. In Week 7, he grabbed a pair of top fives in the SK Modifieds and Street Stock races, and added a top ten in the Super Late Model race as well. His only finish outside of the top ten was in the Pro Late Model road course event where he just missed out in 11th. Look for more solid runs from here on out.

8. Tom Wetmore – Last Week: NR (+3)
Over the past three weeks, Tom has earned himself three top ten finishes in five starts, including his best race to date in Week 7. In the Street Stock race at Lucas Oil Raceway, Tom jumped into the lead early before dropping back, but by the end of the race he found himself right back up front battling amongst the leaders before picking up his career best finish of 2nd. We should see more good runs from him during the rest of the season.

7. Parker Traves – Last Week: NR (+4)
Parker has just three starts over the past two weeks in the Pro Late Model division, but he’s making them count. In Week 6 he picked up a 2nd and a 1st in the Twin Features at Irwindale, and then backed it up in Week 7 on the road course at Watkins Glen with a 5th place finish. As long as Parker continues to run throughout the rest of the season, expect some more strong finishes like these.

6. Jason Williams – Last Week: NR (+5)
Jason has really stepped it up over the past few weeks of the season. In the four weeks prior to the Fall Brawl, Jason had just two top tens in eight starts, but in the past three weeks of the season, he’s picked up five top tens in seven starts. In Week 7, he picked up his best career SARA finish with a 3rd at Iowa in the Super Late Models. Look for Jason to continue improving and for more good runs throughout the end of the season.

5. Matt Rolfe – Last Week: NR (+6)
Over the past few weeks, Matt has a total of twelve starts, and has only finished outside of the top ten just one time. In his eleven top tens, five of those are also top five finishes. In Week 7, he had his only finish outside the top ten with a 15th in the SK Modified race after leading laps early, but then backed it up with finishes of 3rd, 8th, and 4th. Matt finds himself in contention for two points titles, so look for him to run strong to remain in contention.

4. Marc Gammack – Last Week: 10th (+6)
Marc has shown some good improvement this season compared to the Summer Season, and added a couple of good finishes in Week 7 this season. He showed he could be a contender in the road course event in the Pro Late Models when he finished 3rd, and then backed it up the next night with another top ten in 8th in the Super Late Model race. Look for much of the same over the rest of the season.

3. Windell Stratton – Last Week: 6th (+3)
Windell had a strong Week 7 to move him up a couple spots in the rankings this week. He also showed he could be a contender on a road course when he took 2nd in the Pro Late Model event at Watkins glen, and then repeated his finish when he ended up 2nd in the Super Late Model race at Iowa as well. Windell should continue to be a threat for wins each time out.

2. David Krikorian – Last Week: 7th (+5)
David has only made a handful of starts this season in the Super Late Models, and he’s made them count with solid finishes. He made his first Pro Late Model start of the season in Week 7 and made it count as well as he went out and picked up yet another victory on a road course when he dominated the event at Watkins Glen. With a PLM win under his belt this season, we think he could return to SLM victory lane soon as well.

1. Bill Martin – Last Week: 3rd (+2)
Bill made three starts in Week 7, with one of those finishes being a 25th in the Pro Late Model road course event. But his other two races resulted in a pair of trips to victory lane as he won both the SK Modified race at Phoenix and the Super Late Model race at Iowa. Bill also leads the points standings in the SK Mods and PLM divisions, and should be a threat to pick up both championships if he keeps adding wins to his stats.

*Power Rankings are based off a driver’s performance over the past three weeks of the season. Wins, poles, laps led, top fives, and top tens all effect a drivers position in the power rankings in a positive way, while finishes outside of the top fifteen or worse, and failing to qualify for races will effect it in a negative way.