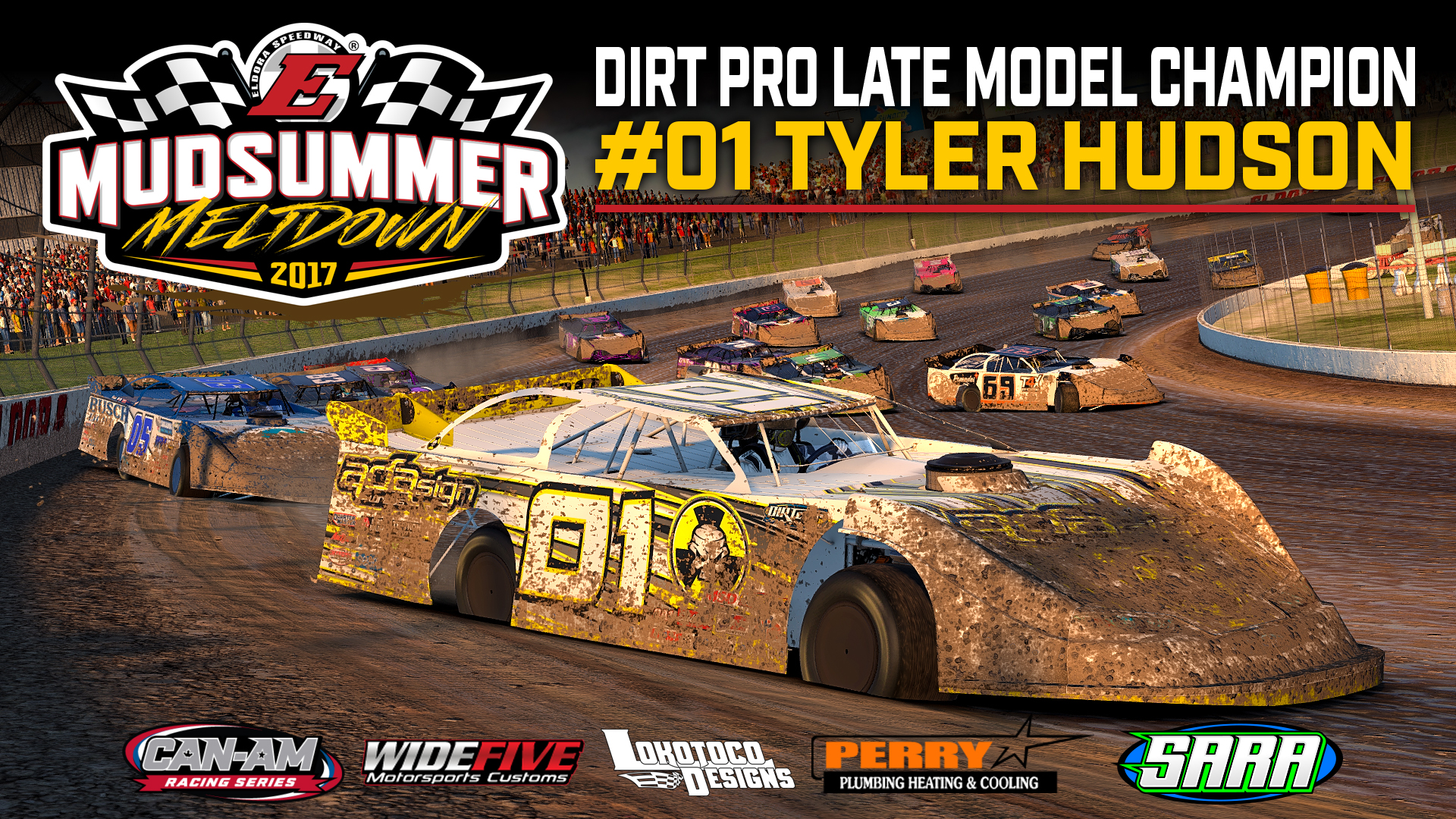 The 2017 Mudsummer Meltdown, presented by the Sim Auto Racing Association and Can-Am Racing Series, is officially in the books and Bradon, Mississippi’s Tyler Hudson was victorious in the inaugural 125-lap race to become the first Meltdown champion. It wasn’t easy for Hudson though, as he would have to overcome a lot of adversity on his way to winning our first major dirt event.

Entering the week, a total of 40 drivers would enter the Dirt Pro Late Model portion of the event, setting up an intense Qualifying Night as only 26 drivers would be able to lock themselves into the starting grid. Joe Schaffer Jr. set the fastest lap in Time Trials with a lap of 15.451 seconds to lock himself in, along with the top 8 in speeds, but after an invert in the Pole Dash it was Christian Challiner would win the dash and put himself on the pole for the Meltdown feature. Everyone from 9th on back in Time Trials, would be forced to race their way in via Qualifiers, or a Last Chance Qualifier to make the field.

Once the field was locked in, it was all about Race Night as the 26-car grid Pro Late Models would roar to life on the banks of Eldora Speedway for 125 laps. Challiner led the field to the green, but early on lap 2 some contact amongst front runners Ty Spearman and Tyler Hudson slowed the pace down immediately as Spearman would get turned around in front of the field to bring out the first caution, and Hudson would be forced to go to the rear.

After a couple of early yellows, Challiner continued to lead but started facing pressure from Joe Schaffer Jr. and the two would trade a pair of sliders back and forth, just as another caution would come out as Schaffer nosed ahead to take over the lead on lap 24. After the next restart, the field would set out on a 40-lap green flag run which allowed drivers to settle in and battles began to heat up.

Out front, the top four cars would begin to pull away, led by Schaffer and Shane James, with Challiner and Derek Robinson in tow. Schaffer looked content holding off the filed until he made one mistake on lap 50 as he got up into the wall, allowing James to sneak by into the lead, as Schaffer began to drop back. Once James took the lead, he began to pull away as the top five battled behind him. And while all that was going on, Tyler Hudson was charging back though the field and into the top ten.

Throughout the second half of the race as the track slicked off, cautions became more frequent, allowing James to control the restarts up front. Challiner moved back up to 2nd but had to hold off multiple attempts from Matt Rolfe for the spot, while Hudson continued to work his way back froward. On lap 82, some contact around the top five between Rolfe, Hudson, Robinson and Adam Benefiel stacked up the field and Hudson would get turned around but was able to continue on after losing 7 positions.

It didn’t take long for Hudson to recover though as he worked his way back up into the top three before lap 100 behind James and Challiner. After a pair of back-to-back cautions, a restart on lap 113 would set up a battle for the lead as James continued to hold the spot. Hudson would throw a slider up in front of James a couple laps later, but would slip up on exit, allowing James to get back by on the outside. He wouldn’t give up as he threw another slider the next lap as well, but James would pull the crossover and held onto the spot once again. The third time was the charm though for Hudson, and he again slid up into the outside groove, forcing James to check up and Hudson would take over with less than 10 to go.

One last yellow would slow the field, setting up the final restart with 4 laps to go. On the start, Hudson and James drag raced down into turn one, and both would enter the corner up high, and some contact amongst them would force James up into the wall and out of contention as cars behind him would get tangled up as well, forcing the race to end under caution. Out in front of the yellow, Hudson was able to keep his car straight and out in front, and would lead the field around to the checkered and yellow flags.

Hudson would take the victory, after having to charge through the entire field after an early yellow, and made his way forward when it counted to lead 11 laps for the win. Hudson’s victory would earn him the 26″ eagle-topped winners trophy, a replica 1/24-scale diecast of his winning car, and $40 in purse money. 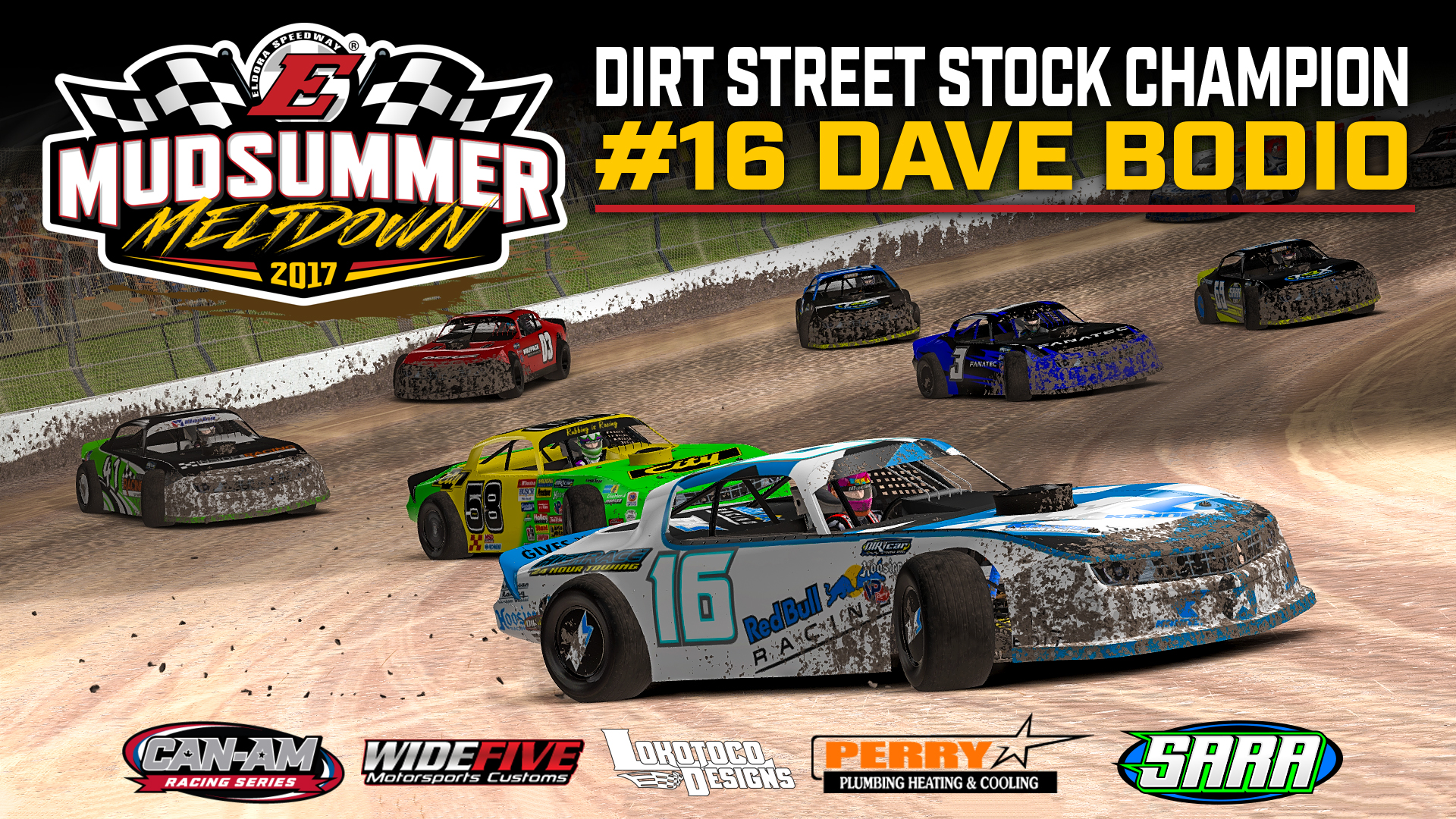 Before the Pro Late Models hit the track in the Mudsummer Meltdown, the Dirt Street Stocks would run their own 85-lap feature as the support division for the night.

Justin Wilson led the field to the green flag and controlled the race for the first 31 laps before Dave Bodio joined the fight. Bodio would go to the inside of Wilson as they battled side-by-side for a handful of laps, with Bodio nosing ahead on lap 32 for the lead but Wilson would fight back on the outside to retake the lead before the caution would fly on lap 38.

After the restart, the battle continued up front as Bodio again went to the bottom to try and pass Wilson, this time throwing a slider up in front of him to take the lead. Throughout the second half of the race, with the field battling behind him, Bodio was able to maintain control out until Derek Robinson charged up contend for the lead.

Robinson made his way into 2nd when Wilson got into the outside wall, and then threw a big slider on Bodio to take the lead. But Bodio fought back and threw a slider of his own as Robinson made contact with the wall, both cars would make contact as well, and Bodio escaped with the lead just before Robinson and Wilson would tangle to bring out the caution with 17 to go.

As the laps wound down, Bodio continued to lead but the fight was behind him as Michael Reding made his way up into 2nd after spending much of the race outside the top ten, and Wilson was able to recover back up to take 3rd.

Up front though, it was Bodio that would lead the field to the checkered flag to take the victory, leading 45 laps on the night. Congrats to Dave Bodio, the 2017 Mudsummer Meltdown Street Stock champion.

Watch the full race broadcast of both features below: