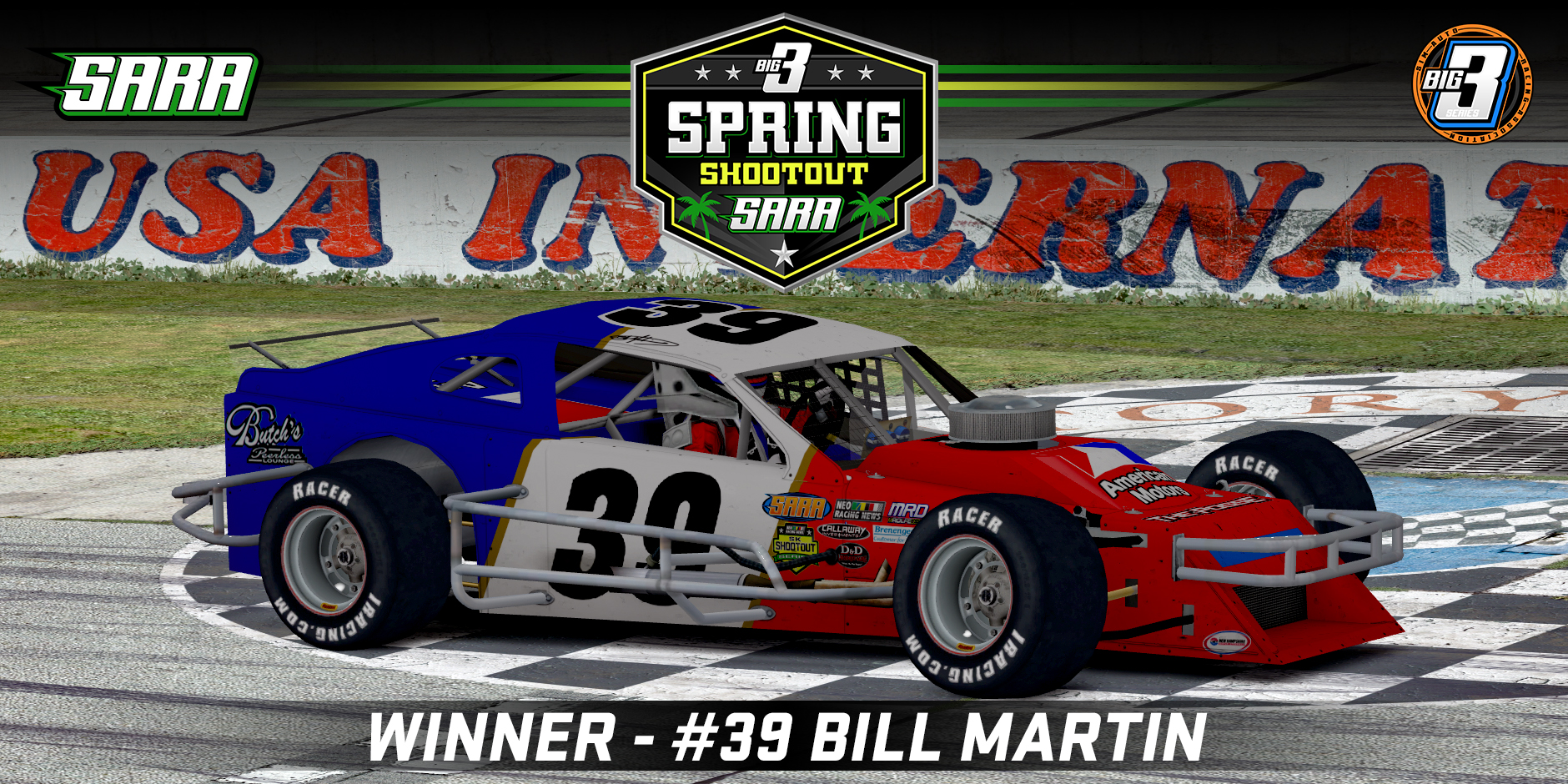 The inaugural Spring Shootout, the first event in the 2016 SARA Big 3 Series, kicked off last week as the SK Modifieds hit the track on Monday night for the first of four nights of racing at the USA International Speedway.

SK Modified Qualifying Night saw Ty Spearman set the fast lap in Time Trials, before an invert sent him back which allowed Bill Martin to charge through the field in the Qualifying Dash to earn himself the pole for the 175-lap feature event.

Fast forward to Thursday night, and Bill Martin led the field to the green flag to get the SK Modified feature underway. Martin jumped ahead into turn one but it was Austin Yarbrough who started in the 2nd spot that pulled the crossover move to get to Martin’s inside out of turn two, and came around on lap 1 to take the lead.

The entire field settled in single file early on which allowed Martin who had fallen back to 2nd to have a chance to regroup and he worked his way back up to Yarbrough to put the pressure back on for the lead. Martin stayed glued to the rear bumper of the leader and finally made his move back to the inside of Yarbrough on lap 9 and came away with the top spot.

From there the opening green flag run continued until lap 25, where an incident amongst the front runners took out a couple of the early favorites to win the race. Yarbrough had slipped back into the range of James Linkiewicz as they battled for the 2nd spot, and contact between them sent Yarbrough around in front of the field, leaving Ty Spearman no where to go as the next group of cars came around, and Spearman was collected, ultimately ending up on his roof and ending both car’s chances at a win.

The first caution of the race erased Martin’s lead out front, but after the restart, the race would go on for nearly 100 laps on the next green flag run which allowed Martin to stretch that lead back out. Martin jumped back out into the lead, with Linkiewicz settling in behind him in 2nd. Behind them, Tommy Burns battled it out with Dale Owen for the 3rd spot for a number of laps after Owen had charged through the field from starting towards the back of the field, while Tim Bills ran in the top five throughout the run.

Throughout the course of the 100-lap run, the top five behind the leader jumbled a number of times as each car fought the handling with their setups over the course of the long run. Behind the top five, Matt Rolfe, Matt Eddy, Ian Layne, Clay Snider, Michael German, Dante Curtis, and Russell Berry each took their turns running throughout the rest of the top ten prior to the next caution eventually falling on lap 125.

With one extra set of tires available, everyone would head down pit road during the caution to grab some fresh rubber for the final 50 laps of the race. Martin and Burns elected to take just two tires to maintain their track position out front, while the rest of the field took tall four to see if the extra tires would make the difference to try and knock Martin off the top spot.

The tire strategy didn’t seem to make much of a difference however as Martin and Burns were quickly able to jump ahead of the field to maintain the top two spots. Throughout the next 19-lap green flag run, the field essentially sorted itself back out to how they ran prior to the pit stops as Linkiewicz, Bills, and Owen worked their way back up into the top five once again.

A caution on lap 150 setup another late restart with less than 20 to go. Much like he had done all night, Martin pulled out ahead on the start once again to retain the lead, while Linkiewicz was able to move up the inside lane to steal 2nd, leaving Burns and Owen behind him as they battled to determine the other spots on the podium. As Owen put the pressure on Linkiewicz for 2nd, Burns was doing the same thing to Owen as well which created some intense racing in the closing laps, while Martin was left alone to pull away.

With just 10 laps to go, Owen attempted to make his move for the 2nd spot but got his car loose coming out of turn two which allowed Burns to get a run. As they entered turn three, Burns made his move entering the corner and both his and Owen’s lines came together entering the corner, sending Owen’s car around dropping him out of contention in the late stages after Owen had arguably one of the faster short run cars throughout the night.

The caution set up one last restart with just five laps to go, and again Martin was able to jump out ahead, as Linkiewicz, Burns, and Bills all settled into their familiar positions inside the top five. Behind that group, the battle was on for the 5th spot as Rolfe moved under Eddy for the position, with Clay Snider in two looking to get by, but Eddy hung tough on the outside trying to hold onto the position. Eddy had been one of the faster cars on track during the end of the long green flag run earlier in the race, but as he fought on the high side, his car got loose coming out of turn two with just two laps to go and caught the wall to bring out the final caution of the race.

The last yellow flag of the night allowed Bill Martin to coast around to take the checkered flag. Martin’s dominating performance on the night saw him lead 168 out of 175 laps as he went on to pick up the victory in the SK Modified portion of the SARA Spring Shootout. The victory for Martin earned him a massive paycheck at the end of the night, as he took home the big check for $23.10.

James Linkiewicz, Tommy Burns, and Tim Bills all ran inside the top five all night long, and finished in the 2nd, 3rd and 4th spots respectively, ahead of Matt Rolfe who ran just outside the top five for most of the race before moving up late to take 5th. Clay Snider steadily worked his way forward from the back half of the top ten up to finish in 6th. Scott Dunlap ran outside the top ten for 150 laps of the race before moving up in the late restarts to take 7th. Ian Layne and Michael German both spent most of their races battling up-and-down the order around mid-pack before ultimately finishing 8th and 9th respectively. Rounding out the top ten was Matt Eddy, despite his late incident, he had one of the faster cars of the race in the second half before he dropped back to finish in 10th.

The SARA SK Modifieds will return on April 25th to finish off the final four weeks of the season.