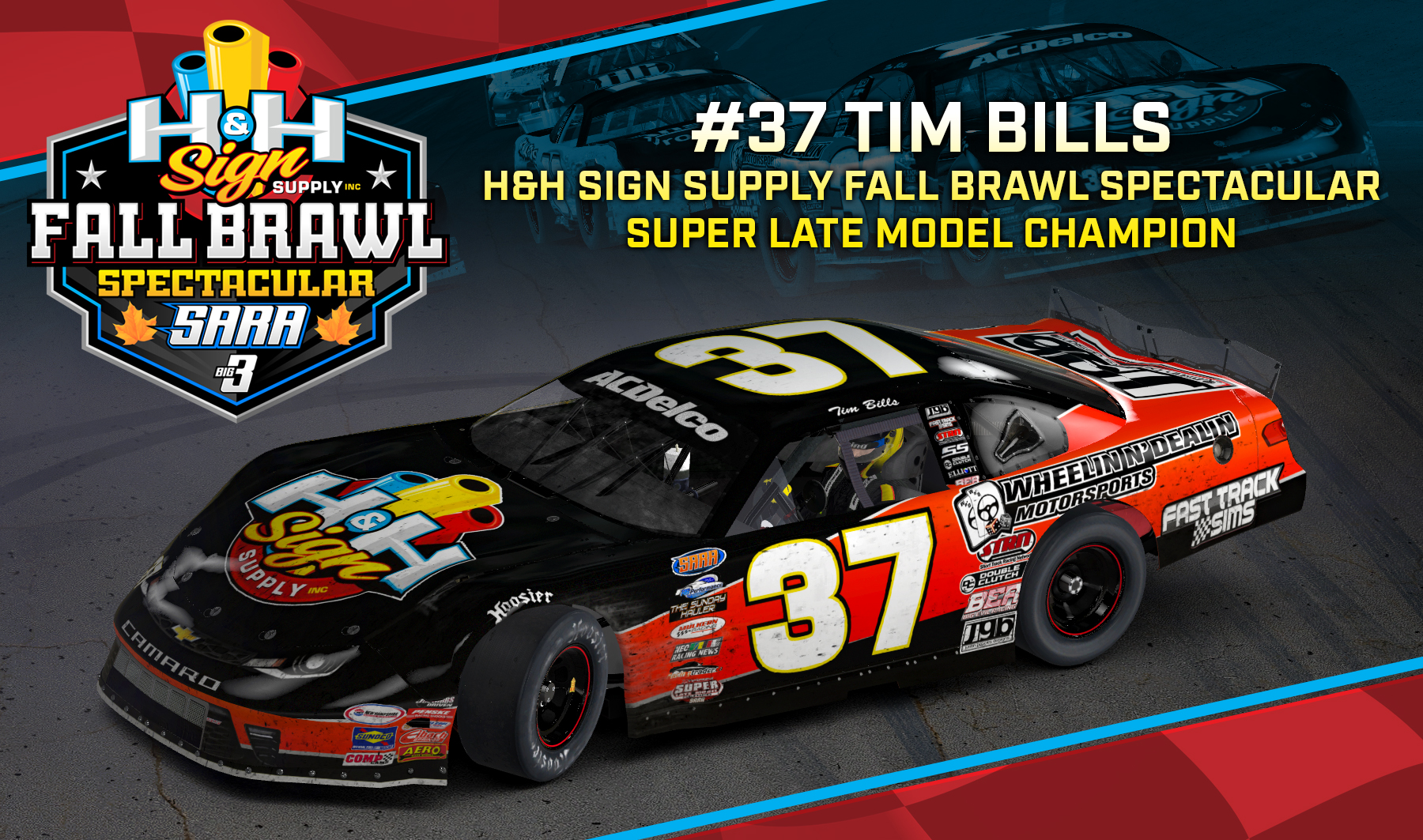 Once the K&N cars and the Pro Late Models rolled out of the Five Flags Speedway last week, the Super Late Models rolled in and took over the track for the 2nd annual H&H Sign Supply Fall Brawl Spectacular. A total of 41 of the best Super Late Model drivers on iRacing hit the track on Wednesday night in hopes of just qualifying for the 250-lap show, but only 28 would make it past Qualifying Night for a shot at the victory.

Watch the video below for a full recap of Super Late Model qualifying night:

After Qualifying Night came to a close, 28 drivers locked themselves into the starting grid for Thursday night’s feature event. Cody Kelley earned the pole starting spot after winning his Heat Race, but was forced to withdraw prior to the race, moving Tim Bills up into the pole position to lead the field to the green flag.

At the drop of the green, Bills jumped out into the lead while the rest of the field set the tone for the night by settling in early for a long green flag run. Long runs would be a theme for the night, with only 4 cautions throughout the race which allowed drivers to see if their setups had what it took to last throughout the race. Bills pulled out to the early lead which grew out to nearly a full second before Majeski moved up into 2nd to cut into the gap.

Between laps 13-30 the gap out front closed as Majeski chased down Bills and took over the lead on lap 31. As the green flag run continued, the leaders began to catch lapped traffic by lap 60 and Majeski saw a big pack of cars battling it out just in front of him. As that pack fought for positions while struggling with the handling of their cars, Ben Nile would get loose and up into the wall, causing a stack-up behind him, leaving Majeski no where to go and multiple cars including the leader would get caught up in the race’s first caution of the night. Majeski’s damage would force him to retire for the night, handing the lead back over to Bills for the restart.

After the race’s first caution, the field was quickly able to settle back in for another long green flag run. During the early portion of the run, Bills held the lead but behind him a trio of non-regulars in SARA occupied positions 2-4 as PJ Stergois jumped up into 2nd followed by Joe Quinn who had been running in the top three all race, and Joe Letteriello also moved up into the 4th spot. Ian Layne also began charging from further back in the pack to work up into the top five at lap 100.

Although Bills looked comfortable up front, the long run allowed multiple grooves to develop and behind him Stergios had begun to roll the outside lane and began cutting into that lead. On lap 136, Stergios pulled up to the outside of Bills, and a lap later he had driver around to take over the race lead. However just before the race reached lap 150, the 2nd caution of the night would come out, setting up the biggest decision of the race for the entire field.

The lap-150 caution forced drivers into one of two strategies. After two long green flag runs, many drivers were in much need of getting fresh tires, and headed down pit road to take new rubber. However a handful of drivers stayed out on track, hoping to wait to take their tires later so they could have the advantage late in the race. Those driver out front that pitted included Bills, Layne, and Quinn, while drivers such as Stergios, Letteriello, Ty Spearman and Bill Martin stayed out on track.

On the restart, it was no surprise that the drivers with fresh tires charged to the front of the field. Ian Layne was the first one to make it up front, taking the lead from Stergios on lap 162, and Quinn, Bills, Trevor Edwards and Matt Rolfe followed him through into the top five. The rest of the drivers that had stayed out on old tires and were hopeful for another caution, saw their shot at the race win disappear when the field set out on another long run that lasted until lap 234 which put all of those cars down a lap during the run.

But for those with fresh tires, it set up quite the brawl up front for the race lead. Layne continued to lead while Quinn and Bills stayed patient behind him as the to three were content to ride. That all changed when Layne caught lapped traffic and pulled up to the back of Spearman and Martin running side-by-side, leaving him without a Layne to get by. Layne moved up to the high side as he was stuck behind them, leaving the bottom open for Quinn to pull up beside him, and the two would battle it out door-to-door as they waited for a chance to get by lapped traffic. Quinn ended up in the correct lane on the bottom as he finally made it three-wide under the lapped cars and took over the race lead on lap 192.

With Quinn getting through the traffic first, Bills would follow him through into 2nd with Edwards moving up into 3rd before Layne could get back in line as he dropped to 4th ahead of Rolfe as the top five cars would fall in line single file. Quinn and Bills would begin to pull away from the others and then the battle for the race lead heated up as Bills started to look for a way by.

Just after crossing the line on lap 200, Bills made his move underneath Quinn for the lead. The two ran side-by-side for a couple of laps before Bills could clear himself into the lead and took over out front with 48 laps to go. The gap between the two leaders would never climb up over a couple car lengths as Quinn was able to hang just behind Bills, but things would all change with the 3rd caution of the race flew with just 16 laps remaining.

The caution would allow the rest of the cars who hadn’t taken tires to come down pit road, but by that point it was too late for them to have a shot at the win. That battle for the win would come down to a pair of late restarts, and on the lap 242 restart a number of cars would get collected in a late-race crash, taking them out of contention for a strong finish. With a number of cars damaged and the field still sorting out the running order, the final restart would be delayed by a lap forcing the field into a 1-lap shootout to the finish.

“This is awesome! I’m super pumped to win this race here for my sponsor H&H Sign Supply, Justforcrafters.com, the Wheelin N Dealin Motorsports guys, we’ve been putting a lot of work in to this and I don’t even know what to say.”Tim Bills

One restart, one lap, one shot to win and when it came down to it, Bills got the quick jump into the lead. Quinn, needing a great restart to have a shot at the win, wasn’t able to clear himself into 2nd as Edwards was able to keep his nose underneath to battle for 2nd. All that was doing was letting Bills get away out front as he put together one perfect lap to close the deal and came around to take the checkered flag to score the victory in the 2016 H&H Sign Supply Fall Brawl Spectacular. Bills would lead a total of three times for 147 laps, and took the win which also scored him the big check at the end of the night of $102.72.

Behind Bills, Quinn and Edwards battled on the final lap running door-to-door across the line and Quinn would edge out the position to finish in 2nd while Edwards was scored in 3rd. Clay Snider had a quiet night but stayed in contention all race long to work his way up into a 4th place finish late. Joe Schaffer rebounded from going a lap down during his pit stop earlier in the race to round out the top five.

Check out the video below for the full broadcast of the H&H Sign Supply Fall Brawl Spectacular: