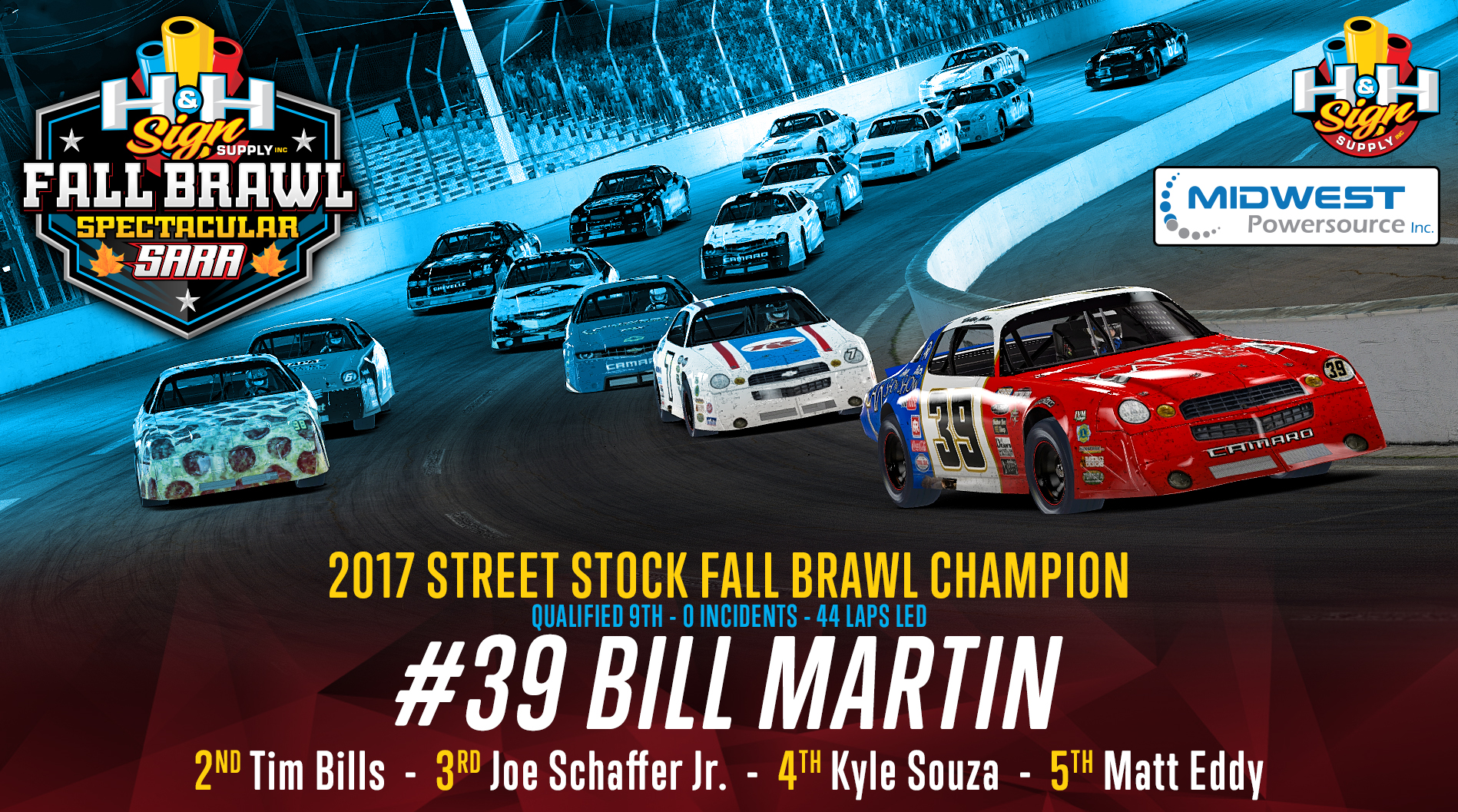 The 3rd Annual H&H Sign Supply Fall Brawl Spectacular got underway on Monday night as the Street Stocks hit the track at Five Flags Speedway for a 150-lap feature event. The race kicks off a full week of racing with Late Models and Super Late Models running throughout the week as well.

The night got started with single car qualifying live on the Digital Forge Broadcasting Network, and the first car on track was Darrell Hamlin who set down a fast lap of 18.352 seconds. Hamlin’s lap was the fastest for most of qualifying, until Tim Bills took it away to set the pole time of 18.303 seconds. Kyle Souza and Ian Layne were the only other two drivers to break the 18.3 second bracket during qualifying.

As the lights turned on at Five Flags, the Street Stocks returned to the track for their 150-lap race, and a 7-car invert at the front of the field sent Tim Bills back into the pack while Ty Spearman was inverted up front to start the race. Ty Spearman jumped out in front early and pulled away by over a second while an intense battle shaped up behind him for second, with Derek Robinson, Joe Schaffer Jr., Darrell Hamlin, Joe Schaffer Jr. and a couple others as they all looked to work their way forward early on. After the first caution, the gap out front went away and Schaffer Jr. put the pressure on for the lead and took over the top spot on lap 44.

With Schaffer Jr. out in front, he looked to pull away before the halfway point of the race, but Tim Bills was able to maintain the gap behind him and started to close in during a green flag run. As Bills approached the rear bumper of Schaffer and looked to the inside for the lead, a caution would fly on lap 87, which would set up the first big round of pit strategy on the night. Schaffer, Bills, Bill Martin and other would all head down pit road for their set of tires, while Trevor Ewards would be the first car to stay out on older tires and would take over the lead.

Just after the restart, Darrell Hamlin would work his way past Edwards for the lead, as Hamlin had taken tires earlier in the night and looked to run away out front before the rest of the field on newer tires could catch up. Bill Martin was the first car on newer tires to come through the field and made his way up to the second position by lap 98, and 10 laps later he caught Hamlin for the lead and was able to pass him on the low side just before the next caution flew.

On the lap 120 restart, Martin got the jump and looked to run and hide out front while the field battled behind him, as he extended his gap up to over 2 seconds during the final run to the finish. Behind him, Ian Layne, Hamlin, and Matt Rolfe each took turns running in the 2nd position until Tim Bills and Schaffer Jr. worked their way back up to the front of the field, but it was too late as Martin was still pulling away out front.

One final caution would fly with just 3 laps to go, sealing the deal for Martin, and he would lead the field back around to the yellow and checkered flags, picking up the victory on Night #1 of the Fall Brawl, earning himself the Street Stock Fall Brawl championship. Martin led 44 laps on the night after starting back in the 9th position. Bills, Schaffer, Kyle Souza, and Matt Eddy rounded out the top five at the finish.

The Late Models will be next on track for the Fall Brawl with a 200-lap feature event on Tuesday night.